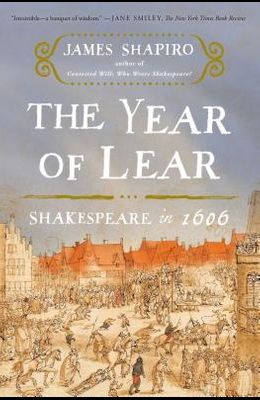 The Year of Lear: Shakespeare in 1606

Preeminent Shakespeare scholar James Shapiro shows how the tumultuous events in 1606 influenced three of Shakespeare's greatest tragedies written that year-- King Lear, Macbeth, and Antony and Cleopatra. The Year of Lear is irresistible--a banquet of wisdom ( The New York Times Book Review ). In the years leading up to 1606, Shakespeare's great productivity had ebbed. But that year, at age forty-two, he found his footing again, finishing a play he had begun the previous autumn-- King Lear --then writing two other great tragedies, Macbeth and Antony and Cleopatra . It was a memorable year in England as well--a terrorist plot conceived by a small group of Catholic gentry had been uncovered at the last hour. The foiled Gunpowder Plot would have blown up the king and royal family along with the nation's political and religious leadership. The aborted plot renewed anti-Catholic sentiment and laid bare divisions in the kingdom. It was against this background that Shakespeare finished Lear , a play about a divided kingdom, then wrote a tragedy that turned on the murder of a Scottish king, Macbeth . He ended this astonishing year with a third masterpiece no less steeped in current events and concerns: Antony and Cleopatra . Exciting and sometimes revelatory, in The Year of Lear, James Shapiro takes a closer look at the political and social turmoil that contributed to the creation of three supreme masterpieces ( The Washington Post ). He places them in the context of their times, while also allowing us greater insight into how Shakespeare was personally touched by such events as a terrible outbreak of plague and growing religious divisions. His great gift is to make the plays seem at once more comprehensible and more staggering ( The New York Review of Books ). For anyone interested in Shakespeare, this is an indispensable book.

List of All Editions of The Year of Lear: Shakespeare in 1606