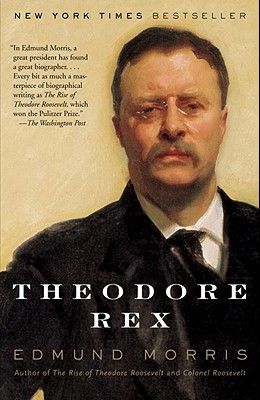 Book #2 in the Theodore Roosevelt Series
by
Edmund Morris

The second entry in Morris's projected three-volume life of Theodore Roosevelt focuses on the presidential years 1901 through early 1909. Impeccably researched and beautifully composed, Morris's book provides what is arguably the best consideration of Roosevelt's presidency ever penned. Illustrations.

From the front Cover Theodore Rex is the story--never fully told before--of Theodore Roosevelt's two world-changing terms as President of the United States. A hundred years before the catastrophe of September 11, 2001, TR succeeded to power in the aftermath of an act of terrorism. Youngest of all our chief executives, he rallied a stricken nation with his superhuman energy, charm, and political skills. He proceeded to combat the problems of race and labor relations and trust control while making the Panama Canal possible and winning the Nobel Peace Prize. But his most historic achievement remains his creation of a national conservation policy, and his monument millions of acres of protected parks and forest. Theodore Rex ends with TR leaving office, still only fifty years old, his future reputation secure as one of our greatest presidents.