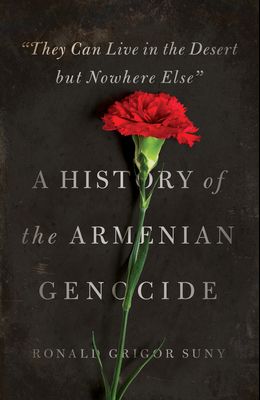 They Can Live in the Desert But Nowhere Else: A History of the Armenian Genocide

A definitive history of the 20th century's first major genocide on its 100th anniversary Starting in early 1915, the Ottoman Turks began deporting and killing hundreds of thousands of Armenians in the first major genocide of the twentieth century. By the end of the First World War, the number of Armenians in what would become Turkey had been reduced by 90 percent--more than a million people. A century later, the Armenian Genocide remains controversial but relatively unknown, overshadowed by later slaughters and the chasm separating Turkish and Armenian interpretations of events. In this definitive narrative history, Ronald Suny cuts through nationalist myths, propaganda, and denial to provide an unmatched account of when, how, and why the atrocities of 1915-16 were committed. Drawing on archival documents and eyewitness accounts, this is an unforgettable chronicle of a cataclysm that set a tragic pattern for a century of genocide and crimes against humanity.

From the Back Cover The centennial of the Armenian Genocide has and will generate many scholarly studies and publications to commemorate this tragic event, the first genocide of the twentieth century. Prominent historian Ron Suny's excellent study stands out for the quality of its research, its judiciousness, and its breadth and depth. This is an invaluable, illuminating, and well-written book--a must-read. --Vartan Gregorian, president of Carnegie Corporation of New York Just how did the Armenian Genocide happen? One extreme view is that the intrinsically murderous Young Turk leaders had made up their minds long before 1915 and were simply biding their time. At the opposite end, apologists have seen no ideological intent whatsoever, arguing instead that the genocide was an inevitable, short-term reaction to Armenian nationalist activity. Against both views, Ronald Suny's illuminating and impeccable narrative argues that an 'affective disposition' that developed among Turkish nationalists over many years led to the slaughter. This cuts to the heart of the matter. --Halil Berktay, Sabanc&#305; University, Istanbul I don't think it's an exaggeration to say that there is no one else in the world who is better able than Ronald Suny to provide a one-volume history of the Armenian Genocide. This is the best book we have on the subject. The narrative is fluid, the writing is crystal clear and engaging, and the scholarship is impeccable. Scrupulously fair-minded, Suny deepens our understanding of the causes of the genocide without, however, rationalizing it. --Norman Naimark, author of Stalin's Genocides This is an excellent comprehensive history of the Armenian Genocide--nuanced, balanced, authoritative, and based on a wide range of sources and perspectives. The interpretation is state of the art and the book is written with Ronald Suny's customary clarity and precision. --Donald Bloxham, author of The Final Solution: A Genocide Ronald Suny treats the Armenian Genocide in a balanced and thoughtful way, avoiding the pitfalls of both nationalist history and denial. He shows empathy and respect for the victims while at the same time explaining why the Young Turks did what they did, and why they thought they had to do it. --Erik Jan Zurcher, author of Turkey: A Modern History Suny's mission is to present a full picture of both sides rooted in deep history. His book, compiled with a mastery of sources, is an act of remembrance itself. --Tom Payne, Sunday Telegraph