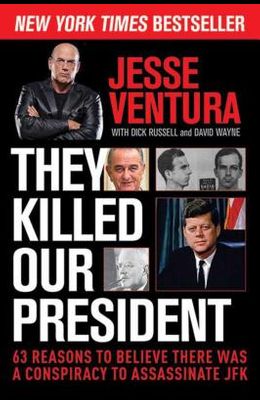 They Killed Our President: 63 Reasons to Believe There Was a Conspiracy to Assassinate JFK

The New York Times bestseller that offers all the evidence on the biggest conspiracy in American history It's been more than fifty years since John F. Kennedy was assassinated, and it's time we all fully understood the facts, theories, and myths surrounding the plot to assassinate the president. New York Times bestselling authors Jesse Ventura, Dick Russell, and David Wayne have created a compendium that covers every possible scenario--from the plot to the murder to the cover-up. Now a New York Times bestseller, They Killed Our President discusses the most famous of theories, such as the second shooter on the grassy knoll, and also brings to light new and recently discovered testimony and reports, which show that elements of the United States government were behind the plot and took every step to make sure that the truth would never be revealed. No stone is left unturned, no document left unread in the research behind They Killed Our President . After reviewing the sixty-three reasons in this book, you will find it undeniable that President Kennedy's death was a product of conspiracy. Skyhorse Publishing, as well as our Arcade imprint, are proud to publish a broad range of books for readers interested in history--books about World War II, the Third Reich, Hitler and his henchmen, the JFK assassination, conspiracies, the American Civil War, the American Revolution, gladiators, Vikings, ancient Rome, medieval times, the old West, and much more. While not every title we publish becomes a national bestseller, we are committed to books on subjects that are sometimes overlooked and to authors whose work might not otherwise find a home.

Books similiar to They Killed Our President: 63 Reasons to Believe There Was a Conspiracy to Assassinate JFK

List of All Editions of They Killed Our President: 63 Reasons to Believe There Was a Conspiracy to Assassinate JFK