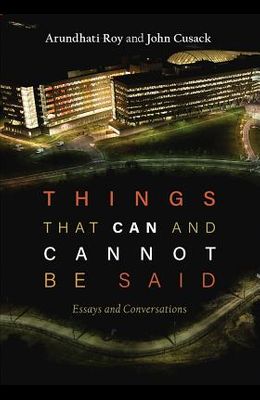 Things That Can and Cannot Be Said: Essays and Conversations

In late 2014, Arundhati Roy, John Cusack, and Daniel Ellsberg travelled to Moscow to meet with NSA whistleblower Edward Snowden. The result was a series of essays and dialogues in which Roy and Cusack reflect on their conversations with Snowden. In these provocative and penetrating discussions, Roy and Cusack discuss the nature of the state, empire, and surveillance in an era of perpetual war, the meaning of flags and patriotism, the role of foundations and NGOs in limiting dissent, and the ways in which capital but not people can freely cross borders. Arundhati Roy is a writer and global justice activist. From her celebrated Booker Prize-winning novel The God of Small Things , to her prolific output of writing on topics ranging from climate change to war, the perils of free-market development in India, and the defense of the poor, Roy's voice has become indispensable to millions seeking a better word. John Cusack is a writer, filmmaker, and a board member of the Freedom of the Press Foundation. He has written the screenplays for the movies Grosse Point Blank, High Fidelity, and War, Inc., with Mark Leyner and Jeremy Pikser, among many others. His writing has appeared widely, including the Guardian, Truthout , and Outlook India .

List of All Editions of Things That Can and Cannot Be Said: Essays and Conversations