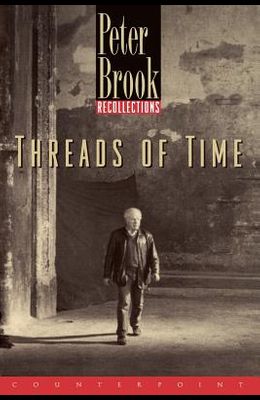 The chronicle of the evolution of an extraordinary artistic intelligence, a man whose interests range worldwide from film to theater to myth and the inner life, Threads of Time offers the memoir of Peter Brook, whom The New York Times has called the English-speaking world's most eminent director. of photos.

From the Back Cover For fifty years, Peter Brook's opera, stage, and film productions have held audiences spellbound. His visionary directing has created some of the most influential productions in contemporary theater. Now at the pinnacle of his career, Brook has given us his memoir, a luminous, inspiring work in which he reflects on his artistic fortunes, his idols and teachers, his philosophical path and personal journey. In this autobiography, the man The New York Times has called the English-speaking world's most eminent director and The London Times has named theater's living legend reveals the myriad sources behind his lifelong passion to find the most expressive way of telling a story. Whether in India's epic Mahabharata or a stage adaptation of Oliver Sask's The Man Who Mistook His Wife for a Hat, South Africa's Woza Albert or The Cherry Orchard, Brook's unique blend of practicality and vision creates unforgettable experiences for audiences worldwide.