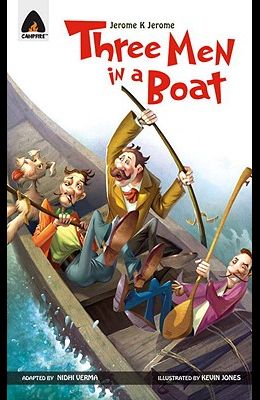 Three Men in a Boat: The Graphic Novel

by
K Jerome and Nidi Verma and K L Jones

One of the best-loved classics of all time, Three Men in a Boat is a hilarious account of three friends and their dog on a holiday trip on the Thames in England. Harris, George, Jerome (the narrator), and Montmorency (the fox terrier) decide to take a break from their tedious routine, to restore their 'mental equilibrium'. And so they take a trip on the Thames between Kingston and Oxford, making certain stops at interesting places, camping out, and inadvertently landing up in comical muddles and misadventures. Originally planned as a travelogue, this book turned into a literary classic, thanks to the narrator's humorous digressions, segueing into the historical background of some places. It is sprinkled with his own musings as they cross Hampton Court Palace, Monkey Island, Magna Carta Island, Marlow, little villages, and other known landmarks on the way. The three men in the novel are based on real-life characters: Jerome himself, and his two friends, George Wingrave and Carl Hentschel.