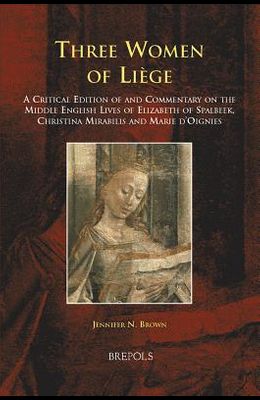 Three Women of Liege: A Critical Edition of and Commentary on the Middle English Lives of Elizabeth of Spalbeek, Christina Mirabilis, and Ma

Elizabeth of Spalbeek, Christina Mirabilis, and Marie d'Oignies were three of the famous late twelfth-/early thirteenth-century 'holy women' from the region of Brabant and Liege: their life stories (written in Latin by Philip of Clairvaux, Thomas of Cantimpre, and Jacques of Vitry) were read throughout later medieval Europe, and Margery Kempe modelled her Book, and her life, upon Marie's. The Latin lives of these beguine saints were not well known in England, but they were translated into English in the fifteenth century, and survive together in a single manuscript: Oxford, Bodleian Library, Douce 114. Three Women of Liege is the first critical edition of these Lives, which represent some of the only evidence of English interest in continental female mysticism. This edition includes an introduction that discusses the role of the manuscript in England and three essays that analyze the roles of these beguines in their Low Countries home of Liege along with the English reception of their lives. The edition itself is also extensively annotated and glossed, making it accessible to any scholar of English medieval literature.