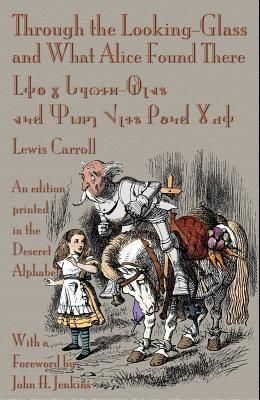 Through the Looking-Glass and What Alice Found There: An Edition Printed in the Deseret Alphabet

Alice's Adventures in Wonderland is a summer tale published by Lewis Carroll (Charles Lutwidge Dodgson) for the first time in July 1865. Many of the characters and adventures in that book have to with a pack of cards. Through the Looking-Glass and What Alice Found There is a winter tale, which Carroll first published in December 1871. In this second tale, the characters and adventures are based on the game of chess. This book contains the famous illustrations of Sir John Tenniel, which first appeared in the original English edition. The Deseret alphabet was developed in the mid-19th century by the board of regents of the University of Deseret (later the University of Utah) under the direction of Brigham Young, second president of the Church of Jesus Christ of Latter-day Saints. It was intended to help make learning to write English easier. This wasn't very successful, though the alphabet does have interesting phonemic features, as well as being a fascinating part of Mormon history. This edition of Through the Looking-Glass is written entirely in that same alphabet, with fonts specially designed by John H. Jenkins and Michael Everson.