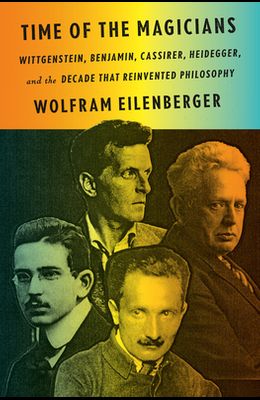 Time of the Magicians: Wittgenstein, Benjamin, Cassirer, Heidegger, and the Decade That Reinvented Philosophy

A grand narrative of the intertwining lives of Walter Benjamin, Martin Heidegger, Ludwig Wittgenstein, and Ernst Cassirer, major philosophers whose ideas shaped the twentieth century The year is 1919. The horror of the First World War is still fresh for the protagonists of Time of the Magicians, each of whom finds himself at a crucial juncture. Benjamin, whose life is characterized by false starts and unfinished projects, is trying to flee his overbearing father and floundering in his academic career, living hand to mouth as a jobbing critic. Wittgenstein, by contrast, has dramatically decided to divest himself of the monumental fortune he stands to inherit, as a scion of one of the biggest industrial families in Europe, in order to commit himself unswervingly to a life of the mind. Meanwhile, Heidegger, having managed to avoid combat in war by serving instead as a meteorologist, is carefully cultivating his career, aligning himself with the great Edmund Husserl, and renouncing his prior Catholic associations. Finally, Cassirer is working furiously on the margins of academia, applying himself intensely to his writing and the possibility of a career at Hamburg University. The stage is set for a great intellectual drama, which will unfold across the next decade. The lives and ideas of this great philosophical quartet will converge as they become world historical figures. But as the Second World War looms on the horizon, their fates will be very different. Wolfram Eilenberger, internationally-bestselling author, stylishly traces the paths of these remarkable and turbulent lives, which feature not only philosophy but some of the most important economists, politicians, journalists, and artists of the century, including John Maynard Keynes, Hannah Arendt, and Bertrand Russell. In doing so, he tells a gripping story about some of history's most ambitious and passionate thinkers, as well as illuminating with rare clarity and economy their brilliant ideas, which all too often have been regarded as enigmatic or opaque.

List of All Editions of Time of the Magicians: Wittgenstein, Benjamin, Cassirer, Heidegger, and the Decade That Reinvented Philosophy