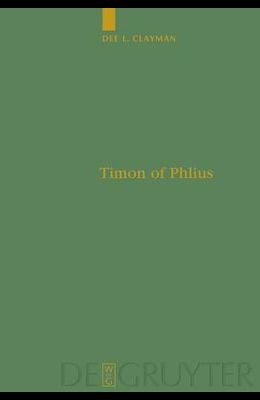 Early Skepticism and its founder, Pyrrho of Elis, were introduced to the world in the third century BCE by the poet and philosopher Timon of Phlius. This is the first book-length study in English of the fragments of Timon's works. Of his more than 100 titles, four fragments remain of a catalogue elegy, the Indalmoi , and 133 verses of the Silloi , a hexameter parody in three books in which Timon ridicules philosophers of all periods whom he observes on a trip to Hades. Dee L. Clayman reconstructs the books of the Silloi starting from an outline in Diogenes Laertius and the book numbers assigned to a few fragments by their sources. This has not been attempted since Wachsmuth's edition of 1885, and carries his approach further by careful observation of syntactic and contextual clues in the text. Using the Greek text of Lloyd-Jones and Parsons of 1983, all of the extant fragments are translated into English and discussed as literature, rather than as source material for the history of philosophy. Separate chapters demonstrate that the principle Hellenistic poets, Callimachus, Theocritus and Apollonius of Rhodes, were aware of Timon's work specifically, and of Skepticism generally. The book concludes with a definition of Skeptical aesthetics that places many of the characteristic features of Hellenistic literature in a skeptical milieu.