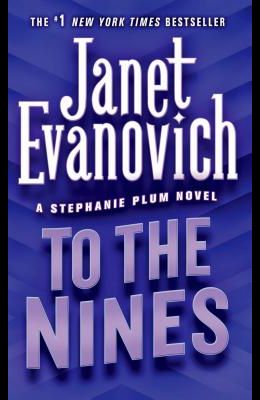 Book #9 in the Stephanie Plum Series
by
Janet Evanovich

From the Back Cover Janet Evanovich's Novels Are The Hottest Bestsellers In America! # 1 New York Times # 1 Wall Street Journal #1 Los Angeles Times #1 Entertainment Weekly #1 Publishers Weekly Stephanie Plum's got rent to pay, people shooting at her, and psychos wanting her dead every day of the week (much to the dismay of her mother, her family, the men in her life, the guy who slices meat at the deli...oh, the list goes on). An ordinary person would cave under the pressure. But hey, she's from Jersey. Stephanie Plum may not be the best bounty hunter in beautiful downtown Trenton, but she's pretty darn good at turning bad situations her way...and she always gets her man. In To The Nines, her cousin Vinnie (who's also her boss) has posted bail on Samuel Singh, an immigrant who becomes an illegal alien by violating his Visa and extending his stay in the United States. When the elusive Mr. Singh goes missing, Stephanie is on the case. But what she uncovers is far more sinister than anyone imagines and leads to a group of killers who give new meaning to the word hunter... In a race against time that takes her from the Jersey Turnpike to the Vegas strip, Stephanie Plum is on the chase of her life. Evanovich's sharpest, funniest, sexiest entry in the series since the early days. -People (Critics Choice)
From the front Cover Praise for To The Nines Evanovich's many fans will be more than happy with their latest serving of Stephanie Plum who just happens to have more laughs, more sizzling sexual tension, and more nonstop zany adventure than anybody else around.-Publishers Weekly (starred review) Evanovich and Stephanie are at the top of their form here: laugh-out loud moments jostle with sticky, visceral terror...ever smarter, sexier, scarier.-Booklist (starred review) It didn't matter diddly if you haven't read Nos. 1 through 8 of the Plum saga. Start right here, right now. This is the best of the bunch...it's pure Evanovich.-The State (Columbia, SC) Evanovich comes up a winner with the funny, fast-paced To the Nines, which has more plot than some of its predecessors...[its]subplots don't detract from the main premise-keeping Stephanie Plum alive, well and more than ready for her next outing. Us too.-Orlando Sentinel To the Nines may be the edgiest of the Stephanie Plum books...Evanovich is brilliantly evocative...she has a genius for almost palpably recreating low-rent scenery like [the] description of the Indian man's industrial-park workplace...these miniatures...and the sizzling sex scenes strike such a wonderfully Hitchcock-like implicitness [and] are what make the Stephanie Plum books such a treat for sore eyes.-Denver Post The fun is right on target in the 10th Stephanie Plum adventure, To the Nines...Evanovich returns year after year with one of the genre's most recognizable and irresistible heroines, and in this year's addition, shows she has what it takes to stay on top.-Houston Chronicle Continues Evanovich's standards for over-the-top situations...an enjoyable read, with many laugh-out-loud situations...the 'apprehension' that begins To the Nines is the kind of lowbrow comedy that Evanovich has made into an art...longtime fans won't be disappointed. -Las Vegas Review Journal Few characters in modern mystery fiction are better loved than Janet Evanovich's...the Stephanie Plum novels are all about characters...and their strange and wonderful interactions. Longtime Evanovich readers cite humor and sense of family among the reasons for reading her books, and I concur wholeheartedly.-Bookpage The appeal of Janet Evanovich's popular creation is that she's not much better than the average Jersey girl would be at nabbing criminals...the charms of Evanovich's writing have less to do with intricate plotting than with the characters in Stephanie's working-class neighborhood and her glamour-free job apprehending bail jumpers.-Entertainment Weekly Hard Eight Evanovich does it again, delivering an even more suspenseful and more outrageous turn with the unstoppable Stephanie.-Publishers Weekly (starred review) The things Evanovich does so well-family angst, sweet eroticism, stealth shopping, that stunning mix of terror and hilarity-are done better than ever here.-Booklist (starred review) Keeps up Evanovich's standards for over-the-top situations -Chicago Tribune [A] must read...readers will want to finish this delightful work in one sitting.--Midwest Book Review The girl mercenary is as fresh as ever. -People Hard Eight is most emphatically not Raymond Chandler but, like his work, a piece of finely crafted prose. -San Francisco Chronicle Plum is one of fiction's most irresistible heroines.-Seattle Post Intelligencer Evanovich has certainly come a long way since One for the Money.--Library Journal Well plotted and cleverly resolved...her wickedly funny characterizations and the intriguing love triangle are what keep her readers coming back for more.-Bookpage As close to summer escapism as you can get. A great addition to a well-stocked beach bag. -Houston Chronicle Seven Up A madcap comic mystery-Jersey-girl style.-The New York Times Expect a laugh per page...Bottom line: Plum Pick.-People If you like your summer reads hot and sassy, try SEVEN UP.-Boston Herald Evanovich is the crown princess of detective fiction...SEVEN UP is brassy, comical, and light-hearted.-Bookpage Edgy romance triangle, the loopy family relationships, or the bounty-hunting jobs that skate between absurdity and genuine tension.-Denver Post Romantic and laugh-out-loud funny, this caper is the perfect summer antidote to serious reading.-St. Louis Post-Dispatch The dialogue's snappy...the pace is quick...Evanovich's great gift is an ability to create situations zany enough to provoke bursts of laughter.-Philadelphia Inquirer Evanovich continues...her successful formula...[she] provides a beginning that illustrates all that is right with this series and an ending that ties the story together, gives us a dose of reality, and leaves us with a cliffhanger.-Chicago Tribune