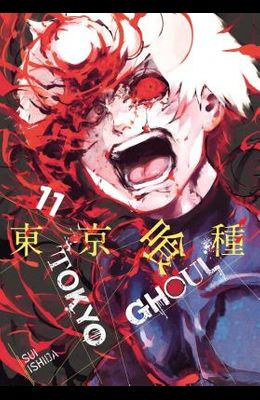 Book #11 in the Tokyo Ghoul Series
by
Sui Ishida

Ghouls live among us, the same as normal people in every way--except for their craving for human flesh. Ken Kaneki is an ordinary college student until a violent encounter turns him into the first half-human half-Ghoul hybrid. Trapped between two worlds, he must survive Ghoul turf wars, learn more about Ghoul society and master his new powers. Amid clashes between Ghouls and the Commission of Counter Ghoul investigators at Doctor Kano's underground facility, Kaneki finds himself locked in battle with Special Class Ghoul investigator Yukinori Shinohara. When the battle subsides, the CCG discovers shocking evidence that leads them closer to discovering the truth behind Kano's sinister plans.