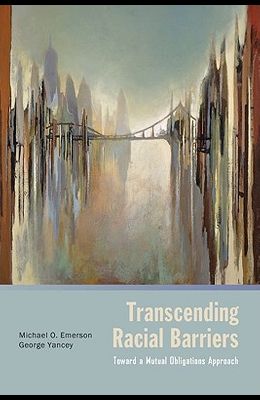 Despite recent progress against racial inequalities, American society continues to produce attitudes and outcomes that reinforce the racial divide. In Transcending Racial Barriers , Michael Emerson and George Yancey offer a fresh perspective on how to combat racial division. They document the historical move from white supremacy to institutional racism, then look at modern efforts to overcome the racialized nature of our society. The authors argue that both conservative and progressive approaches have failed, as they continually fall victim to forces of ethnocentrism and group interest. They then explore group interest and possible ways to account for the perspectives of both majority and minority group members. They look to multiracial congregations, multiracial families, the military, and sports teams-all situations in which group interests have been overcome before. In each context they find the development of a core set of values that binds together different racial groups, along with the flexibility to express racially-based cultural uniqueness that does not conflict with this critical core. Transcending Racial Barriers offers what is at once a balanced approach towards dealing with racial alienation and a bold step forward in the debate about the steps necessary to overcome present-day racism.