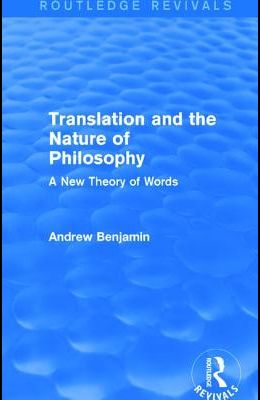 Translation and the Nature of Philosophy (Routledge Revivals): A New Theory of Words

This engrossing study, first published in 1989, explores the basic mutuality between philosophy and translation. By studying the conceptions of translation in Plato, Seneca, Davidson, Walter Benjamin and Freud, Andrew Benjamin reveals the interplay between the two disciplines not only in their relationship to language, but also at a deeper, cognitive level. Benjamin engages throughout with the central tenets of post-structuralism: the concept of a constant yet illusive 'true' meaning has lost authority, but remains a problem. The fact of translation seems to defy the notion that 'meaning' is reducible to its component words; yet, to say that the 'truth' is more than the sum of its parts, we are challenging the very foundations of what it is to communicate, to understand, and to know. In Translation and the Nature of Philosophy, the author sets out his own theory of language in light of these issues.