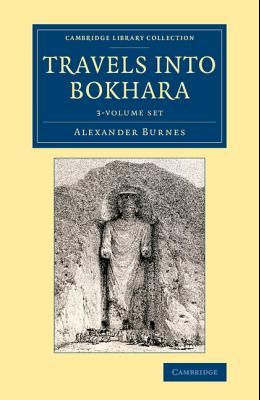 Travels Into Bokhara 3 Volume Set: Being the Account of a Journey from India to Cabool, Tartary and Persia; Also, Narrative of a Voyage on the Indus,

Aged sixteen, Alexander Burnes (1805 41) took up a post in the Bombay army, and speedily learned both Hindustani and Persian. His skills led him to political work, and he himself proposed a covert expedition to Bukhara, to survey the country, but also to observe the expansionist activities of the Russians in central Asia. In 1832, he set off, with an army doctor, and two Indians as surveyor and secretary. They travelled in local dress and adopted whatever personas a situation required. Having reached Bukhara, they continued overland to the Caspian Sea, and then to Tehran, returning to Bombay by sea in 1833. This three-volume account of his adventures, published in 1834, was an instant bestseller. The first two volumes describe the expedition, and the third an earlier journey to Lahore. Burnes continued his diplomatic activities in Afghanistan, but was murdered there by a mob in 1841.