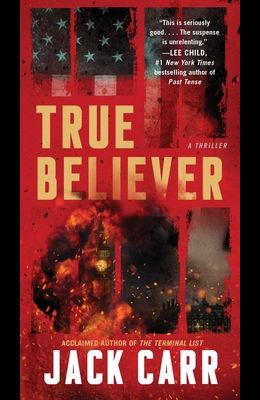 Both author Jack Carr and main character James Reece are the real deal, the action is razor sharp, the suspense is unrelenting, and the tradecraft is so authentic, the government will probably ban it--so read it while you can --Lee Child, #1 New York Times bestselling author of Past Tense True Believer by Jack Carr is a powerful, thoughtful, realistic, at times terrifying thriller that I could not put down. --Mark Greaney, #1 New York Times bestselling author of Mission Critical When a string of horrific terrorist attacks plagues the Western world during the holiday season, the broader markets fall into a tailspin. The attacks are being coordinated by a shadowy former Iraqi commando who has disappeared into Europe's underground. The United States government has an asset who can turn the Iraqi against his masters: James Reece, the most-wanted domestic terrorist alive. If you are a fan of Vince Flynn or Brad Thor, make room on your nightstand (Eric Blehm, New York Times bestselling author) for the new leader in political thrillers. Exploding with action and authenticity, True Believer is a high-intensity roller-coaster ride.

List of All Editions of True Believer, 2: A Thriller