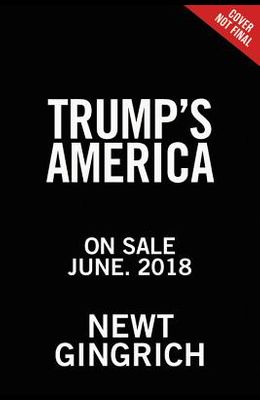 Trump's America: The Truth about Our Nation's Great Comeback

No one understands the Make America Great Again effort with more insight and more experience than former Speaker of the House Newt Gingrich. Gingrich helped President Ronald Reagan Make America Great Again in 1980. He authored the Contract with America and spearheaded the 1994 Republican Revolution that brought the House of Representatives under Republican control after forty years of Democratic dominance. He knows what it is like to fight the Washington Swamp and challenge the establishment - he has done it his entire career. Now the author of the #1 New York Times bestseller Understanding Trump is back to illustrate how the nation's 45th president is leading our country's great comeback. From the fight over the Southern Border Wall, to the Republican tax cuts, to the Swamp's unending efforts to undermine and oppose the president, Trump's America lays out the truth about the Trump presidency: the truth the mainstream media won't tell you. In this book, Gingrich - who has been called the president's chief explainer - presents a clear picture of this historic presidency and the tremendous, positive impact it is having on our nation and the world. He unmasks the various branches of the anti-Trump coalition that are trying to stop America's great comeback, revealing the flaws in the ideological assaults on the president and offering a battle plan to help defeat these attacks. Throughout Trump's America, Gingrich distills decades of experience fighting Washington with a lifetime of studying history to help every American understand how we can all keep working to make America great. p.p1 {margin: 0.0px 0.0px 0.0px 0.0px; font: 12.0px Arial; color: #424242} p.p2 {margin: 0.0px 0.0px 0.0px 0.0px; font: 12.0px Arial; min-height: 14.0px} p.p3 {margin: 0.0px 0.0px 0.0px 0.0px; font: 12.0px Arial} p.p4 {margin: 0.0px 0.0px 0.0px 0.0px; font: 12.0px Geneva; min-height: 16.0px} span.s1 {color: #000000} span.s2 {font: 12.0px 'Times New Roman'}