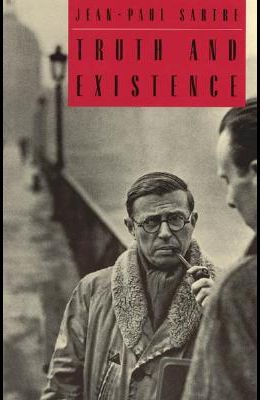 by
JeanPaul Sartre and Adrian VanDenHoven and Ronald Aronson

Truth and Existence , written in response to Martin Heidegger's Essence of Truth , is a product of the years when Sartre was reaching full stature as a philosopher, novelist, playwright, essayist, and political activist. This concise and engaging text not only presents Sartre's ontology of truth but also addresses the key moral questions of freedom, action, and bad faith. Truth and Existence is introduced by an extended biographical, historical, and analytical essay by Ronald Aronson. Truth and Existence is another important element in the recently published links between Sartre's existentialist ontology and his later ethical, political, and literary concerns. . . . The excellent introduction by Aronson will help readers not experienced in reading Sartre.-- Choice Accompanied by an excellent introduction, this dense, lucidly translated treatise reveals Sartre as a characteristically 20th-century figure.-- Publishers Weekly Jean-Paul Sartre (1906-1980) was offered, but declined, the Nobel Prize for literature in 1964. His many works of fiction, drama, and philosophy include the monumental study of Flaubert, The Family Idiot , and The Freud Scenario , both published in translation by the University of Chicago Press.

From the Back Cover At long last, Truth and Existence allows us to read Jean-Paul Sartre's analysis of knowing and truth. This brilliant epistemological sequel to Being and Nothingness was found among Sartre's unpublished manuscripts by his adoptive daughter and executor, Arlette Elkaim-Sartre. Posthumously published in France in 1989, the work dates to 1948, shortly after Sartre's controversial call for the writer's political commitment and his celebrated public lecture Existentialism Is a Humanism. Truth and Existence, written in response to Martin Heidegger's The Essence of Truth, is a product of the years when Sartre was reaching full stature as a philosopher, novelist, playwright, essayist, and political activist. This brief, coherent, and engaging text presents Sartre's ontology of truth in terms of his characteristic key moral questions of freedom, action, and bad faith. While stressing the intuitive and personal dimensions of truth, Truth and Existence also explores the argument that ignoring is an intentional act starting, like all knowledge, from the primary ontological condition of ignorance. Thus, at the heart of Sartre's discussion are explanations of ignorance (as resulting from the choice to ignore), phenomenological descriptions (of behavior seeking to avoid the truth), and the reasons why one chooses to avoid the truth. Sartre explores why one Madame T., afflicted with tuberculosis, should choose to ignore the disease that is killing her rather than take responsibility for it. Here is Sartre the existentialist at his most original and most provocative: this work of epistemology, based on ontology, becomes a work of ethics. At the same time, Truth and Existence foreshadows and lays thebasis for some of the most important insights of the Critique of Dialectical Reason. Truth and Existence is introduced by an extended biographical, historical, and analytical essay by Ronald Aronson.