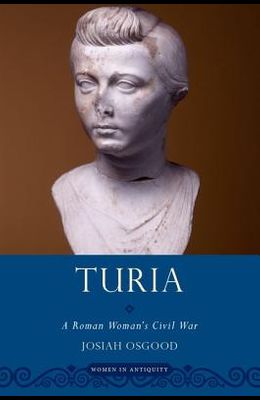 Part of the Women in Antiquity Series
by
Josiah Osgood

The civil wars that brought down the Roman Republic were fought on more than battlefields. Armed gangs infested the Italian countryside, mansions were besieged in the city, and bounty-hunters searched the streets for public enemies. Among the astonishing stories to survive from these years is that of a young woman whose parents were killed, on the eve of her wedding, in the violence engulfing Italy in the late first century BC. While her future husband fought overseas, she staved off a run on her father's estate and raised money to help her fiance in exile. Further, when her husband, back in Rome, was declared an outlaw, she successfully hid him, worked for his pardon, and joined other Roman women in staging a public protest. The wife's tale is known only because her husband had inscribed on large slabs of marble the elaborate eulogy he gave at her funeral. In this book, Josiah Osgood reconstructs the life of Turia, as the wife is commonly known, more fully than it has been before by bringing in alongside the eulogy stories of other Roman women who also contributed to their families' survival while working to end civil war. He shows how the wife's story sheds rare light on the more hidden problems of everyday life for Romans, including a high number of childless marriages. This unique narrative is more than a biography of one woman: it is a portrait of a vivid period in Roman history and a tribute to married love which though from another world speaks to us today.

Women in Antiquity Series In Order - By Josiah Osgood