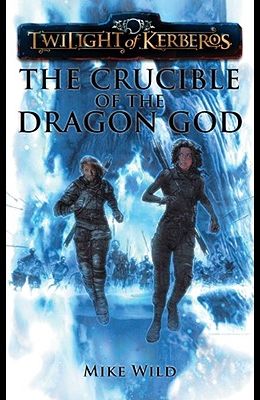 Twilight of Kerberos: The Crucible of the Dragon God

Book #4 in the Twilight of Kerberos Series
by
Mike Wild

Tomb Raider meets Lord of the Rings. Twilight, a world overshadowed by a vast gas giant, bathing the earth in its otherworldly glow. A world of magic and warriors, zealots and monsters. It is here that the human race cling to a small peninsula, ignorant of what lies beyond the World's Ridge mountains. But there are those amongst this fledgling race with truly extraordinary powers, heroes who would delve deep into the mysteries of the past and bring new light to Twilight. Twilight of Kerberos is a sword and sorcery series, following the adventures of a group of characters with unique talents. A deadly predator swarms across Twilight. Exactly what are the 'k'nid' and how can they be stopped? A question for Kali Hooper to answer. Doing so will prove far from easy. From a labyrinthine deathtrap to an ancient limbo and the aquatic lair of a serpent, Kali must battle her way to the Crucible of the Dragon God. She is about to discover the true reason her world is called Twilight

Twilight of Kerberos Series In Order - By Mike Wild