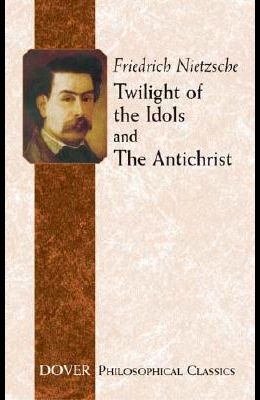 Twilight of the Idols and the Antichrist

Books for everybody are always malodorous books: the smell of petty people clings to them, scoffed Friedrich Nietzsche. These two works, Twilight of the Idols and The Antichrist , crowned the radical philosopher's career of writing books that are decidedly not for everyone. Written in 1888, while Nietzsche was at the height of his brilliance -- but shortly before the onset of the insanity that gripped him until his death in 1900 -- they blaze with provocative, inflammatory rhetoric. Nietzsche's grand declaration of war, Twilight of the Idols examines what we worship and why. Intended by the author as a general introduction to his philosophy, it assails idols of Western philosophy and culture (Socratic rationality and Christian morality among them) and sets the scene for The Antichrist . In addition to its full-scale attack on Christianity and Jesus Christ, The Antichrist denounces organized religion as a whole. H. L. Mencken declared that it is, to many sensitive men, in the worst possible taste, but at bottom it is enormously apt and effective -- on the surface, it is undoubtedly a good show. Students of philosophy, history, and German literature will find these works essential to an understanding of Nietzschean philosophy.