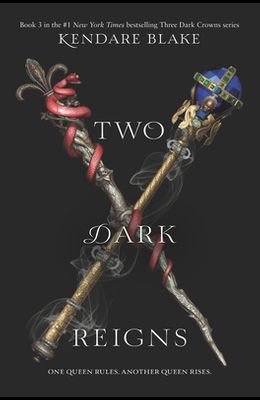 Book #3 in the Three Dark Crowns Series
by
Kendare Blake

In the highly anticipated third book in Blake's #1 New York Times-bestselling Three Dark Crowns series, a queen that has long been dead makes a chilling return to Fennbirn Island.

From the Back Cover KATHARINE HAS WAITED HER WHOLE LIFE TO TAKE THE THRONE. And with the fury of the dead queens roaring beneath her skin, her time has come. But many still challenge her rule, and with the whereabouts of her sisters unknown, Katharine's anxiety grows. Then bodies mysteriously start washing ashore, throwing Fennbirn into a panic. Hiding out on the Mainland, Arsinoe and Mirabella try to make a life for themselves away from all they've lost. But it's not long until home beckons: Arsinoe is haunted by visions of the legendary Blue Queen, a rare and mystical fourth-born queen who died hundreds of years earlier. Jules, after befriending a war-gifted girl named Emilia, learns there is a rebel army that wants to usurp the throne--and they want Jules to lead the charge. A queen on the throne, two on their way home, and an unexpected renegade who's gone to ground . . . the crown has been won, but these queens are far from done.