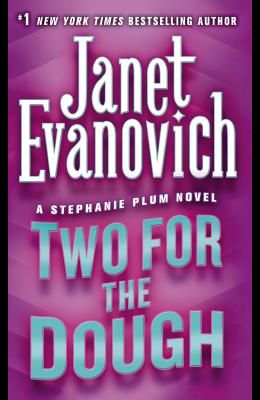 Two for the Dough

From the Back Cover BESTSELLING AUTHOR JANET EVANOVICH'S WILDLY ENTERTAINING STEPHANIE PLUM SERIES IS TOP OF THE CHARTS! # 1 New York Times - # 1 Wall Street Journal - #1 Los Angeles Times - #1 Entertainment Weekly - #1 Publishers Weekly - #1 Dallas Morning News - #1 USA Today - #1 Booksense THIS ONE'S DOUBLE THE FUN! Bounty hunter Stephanie Plum is still learning the ropes at her cousin Vinnie's bail bond office, so when she sets out on the trail of Kenny Mancuso--a suspiciously wealthy, working class Trenton boy who has just shot his best friend--the stakes are higher than ever. That Mancuso is distantly related to vice cop Joe Morelli--who is trying to beat Stephanie to the punch--only makes the hunt more thrilling.... Taking pointers from her bounty hunter pal, Ranger, and using her pistol-packing Granda Mazur as a decoy, Stephanie is soon closing in on her mark. But Morelli and his libido are worthy foes. And a more sinister kind of enemy has made his first move...and his next move might be Stephanie's last. Visit: www.evanovich.com

List of All Editions of Two for the Dough