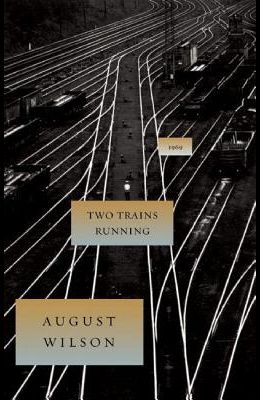 Set in 1969, during the Civil Rights Movement and the rise of Black Power.

From the Back Cover August Wilson surged to the forefront of American playwrights with the success of such critically acclaimed plays as Ma Rainey's Black Bottom and Joe Turner's Come and Gone, as well as his Pulitzer Prize winners Fences and The Piano Lesson. Now, with Two Trains Running, which Time magazine hailed as his most mature work to date, he offers another mesmerizing chapter in his remarkable cycle of plays about the black experience in twentieth-century America. It is Pittsburgh, 1969. The regulars of Memphis Lee's restaurant are struggling to cope with the turbulence of a world that is changing rapidly around them and fighting back when they can. As the play unfolds, Memphis's diner - and the rest of his block - is scheduled to be torn down, a casualty of the city's renovation project that is sweeping away the buildings of a community, but not its spirit. The rich undertaker across the street encourages Memphis to accept his offer to buy the place from him at a reduced price, but Memphis stands his ground, determined to make the city pay him what the property is worth, refusing to be swindled out of his land as he was years before in Mississippi. Into this fray come Sterling, the ex-con who embraces the tenets of Malcolm X; Wolf, the bookie who has learned to play by the white man's rules; Risa, a waitress of quiet dignity who has mutilated her legs to distance herself from men; and Holloway, the resident philosopher and fervent believer in the prophecies of a legendary 322-year-old woman down the street, a reminder of their struggle and heritage. And just as sure as an inexorable future looms right around the corner, these people of loud voices and big hearts continue to search, tofalter, to hope that they can catch the train that will make the difference. With compassion, humor, and a superb sense of place and time, Wilson paints a vivid portrait of everyday lives in the shadow of great events, and of unsung men and women who are anything but ordinary.