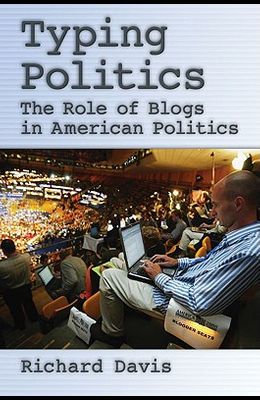 Typing Politics: The Role of Blogs in American Politics

The power of political blogs in American politics is now evident to anyone who follows it. In Typing Politics , Richard Davis provides a comprehensive yet concise assessment of the growing role played by political blogs and their relationship with the mainstream media. Through a detailed content analysis of the most popular political blogs--Daily Kos, Instapundit, Michelle Malkin, and Wonkette--he shows the degree to which blogs influence the traditional news media. Specifically, he compares the content of these blogs to four leading newspapers noted for their political coverage: The Washington Post, The New York Times, The Wall Street Journal , and The Washington Times . He explains how political journalists at these papers use blogs to inform their reportage and analyzes general attitudes about the role of blogs in journalism. Drawing on a national survey of political blog readers, Davis concludes with a novel assessment of the blog audience. Compact, accessible, and well-researched, Typing Politics will be an invaluable contribution to the literature on a phenomenon that has reshaped the landscape of political communication.