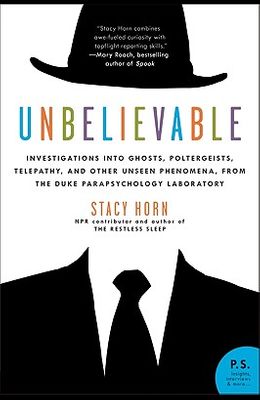 Unbelievable: Investigations Into Ghosts, Poltergeists, Telepathy, and Other Unseen Phenomena, from the Duke Parapsychology Laborato

From The Sixth Sense to Medium , Ghost Whisperer to Ghost Hunters , the paranormal stirs heated debate, spawning millions of believers and skeptics alike. Nearly half of us say we believe in ghosts, and two-thirds of us believe in life after death. What would you make of rain barrels that refill themselves? Psychic horses? Mind-reading Cold War spies? For a group of scientists at the Duke Parapsychology Lab under the leadership of Dr. J. B. Rhine--considered the Einstein of the paranormal--such mysteries demanded further investigation. From 1930 to 1980, these dedicated men and women attempted to test the bizarre, the frightening, and the unexplainable against the rigors of science, ultimately finding proof that the human mind possesses telepathic powers. --Bust Magazine