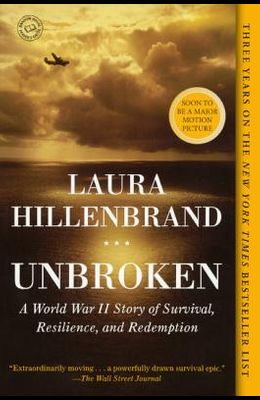 #1 NEW YORK TIMES BESTSELLER - SOON TO BE A MAJOR MOTION PICTURE - Look for special features inside. Join the Random House Reader's Circle for author chats and more. On a May afternoon in 1943, an Army Air Forces bomber crashed into the Pacific Ocean and disappeared, leaving only a spray of debris and a slick of oil, gasoline, and blood. Then, on the ocean surface, a face appeared. It was that of a young lieutenant, the plane's bombardier, who was struggling to a life raft and pulling himself aboard. So began one of the most extraordinary odysseys of the Second World War. The lieutenant's name was Louis Zamperini. In boyhood, he'd been a cunning and incorrigible delinquent, breaking into houses, brawling, and fleeing his home to ride the rails. As a teenager, he had channeled his defiance into running, discovering a prodigious talent that had carried him to the Berlin Olympics and within sight of the four-minute mile. But when war had come, the athlete had become an airman, embarking on a journey that led to his doomed flight, a tiny raft, and a drift into the unknown. Ahead of Zamperini lay thousands of miles of open ocean, leaping sharks, a foundering raft, thirst and starvation, enemy aircraft, and, beyond, a trial even greater. Driven to the limits of endurance, Zamperini would answer desperation with ingenuity; suffering with hope, resolve, and humor; brutality with rebellion. His fate, whether triumph or tragedy, would be suspended on the fraying wire of his will. In her long-awaited new book, Laura Hillenbrand writes with the same rich and vivid narrative voice she displayed in Seabiscuit. Telling an unforgettable story of a man's journey into extremity, Unbroken is a testament to the resilience of the human mind, body, and spirit. Hailed as the top nonfiction book of the year by Time magazine - Winner of the Los Angeles Times Book Prize for biography and the Indies Choice Adult Nonfiction Book of the Year award Extraordinarily moving . . . a powerfully drawn survival epic.--The Wall Street Journal A] one-in-a-billion story . . . designed to wrench from self-respecting critics all the blurby adjectives we normally try to avoid: It is amazing, unforgettable, gripping, harrowing, chilling, and inspiring.--New York Staggering . . . mesmerizing . . . Hillenbrand's writing is so ferociously cinematic, the events she describes so incredible, you don't dare take your eyes off the page.--People A meticulous, soaring and beautifully written account of an extraordinary life.--The Washington Post Ambitious and powerful . . . a startling narrative and an inspirational book.--The New York Times Book Review Marvelous . . . Unbroken is wonderful twice over, for the tale it tells and for the way it's told. . . . It manages maximum velocity with no loss of subtlety.--Newsweek Moving and, yes, inspirational . . . Laura] Hillenbrand's unforgettable book . . . deserve s] pride of place alongside the best works of literature that chart the complications and the hard-won triumphs of so-called ordinary Americans and their extraordinary time.--Maureen Corrigan, Fresh Air Hillenbrand . . . tells this] story with cool elegance but at a thrilling sprinter's pace.--Time

Books like Unbroken: A World War II Story of Survival, Resilience, and Redemption

0
|   0  reviews
Did you read Unbroken: A World War II Story of Survival, Resilience, and Redemption? Please provide your feedback and rating to help other readers.
Write Review

List of All Editions of Unbroken: A World War II Story of Survival, Resilience, and Redemption