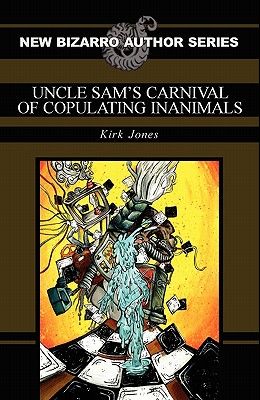 Reborn as an oozing humanoid composed of vitreous humor after a sudden death via a disembodied hand and a wood chipper, Gary Olstrom found no difficulty in saying goodbye to the life he once knew. After all, he had become quite adept at saying goodbye, to his right arm in a hardware store accident at eight, to his parents in a fiery car crash, to his right leg in a factory mishap, and to the only person who ever tried to help him in an untimely bus collision. What he never prepared for was saying goodbye to misfortune, until he found Uncle Sam's Carnival of Copulating Inanimals. Therein, Gary finds refuge training furniture to copulate before spectators who vomit in applause. But while Gary's luck shifts for the better, cities left in the wake of the carnival's visits disappear; many are murdered. With his pet desk Akimbo and his empty-socketed girlfriend-turned-futon, Liberty, Gary attempts to unravel this mystery, culminating in a re-imagining of America to rival that of Benedict Anderson's Well, not quite...but there is furniture porn.