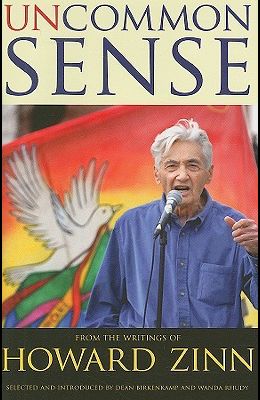 Uncommon Sense: From the Writings of Howard Zinn

by
Howard Zinn and Dean Birkenkamp and Wanda Rhudy

Why Howard Zinn has become one of the most important and influential American historians is perhaps nowhere more evident than in this new book. Few social critics have been as inspiring as the ever-hopeful Zinn and, unlike many historians, Zinn turns historical details toward deeper observations on the universal truths and struggles of humankind. His remarkable wisdom and insight can be found in his earliest writings through his latest essays, speeches, and plays. Uncommon Sense brings together his most poignant and profound quotations from decades of writing and speaking. The book reveals the philosophical side of Howard Zinn and a consistency of vision over 50 years on topics ranging from government to race, history, law, civil disobedience, and activism. Offering quotations of universal and timeless quality, the book shows why history will regard this historian as a political and moral philosopher in the company of Paine, Jefferson, Frederick Douglass, and Martin Luther King Jr.