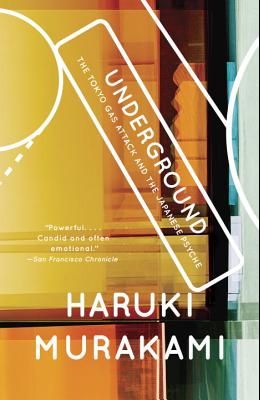 Underground: The Tokyo Gas Attack and the Japanese Psyche

This account of the 1995 gas attack on the Tokyo subway system by a Japanese religious cult is told, based on hundreds of interviews with survivors, relatives of those who died, and the perpetrators.

From the Back Cover It was a clear spring day, Monday, March 20, 1995, when five members of the religious cult Aum Shinrikyo conducted chemical warfare on the Tokyo subway system using sarin, a poison gas twenty-six times as deadly as cyanide. The unthinkable had happened, a major urban transit system had become the target of a terrorist attack. In an attempt to discover why, Haruki Murakami, internationally acclaimed author of The Wind-Up Bird Chronicle and arguably Japan's most important contemporary novelist, talked to the people who lived through the catastrophe -- from a Subway Authority employee with survivor guilt, to a fashion salesman with more venom for the media than for the perpetrators, to a young cult member who vehemently condemns the attack though he has not quit Aum. Through these and many other voices, Murakami exposes intriguing aspects of the Japanese psyche. And as he discerns the fundamental issues leading to the attack, we achieve a clear vision of an event that could occur anytime, anywhere. Hauntingly compelling and inescapably important, Underground is a powerful work of journalistic literature from one of the world's most perceptive writers.
From the front Cover From Haruki Murakami, internationally acclaimed author of The Wind-Up Bird Chronicle and Norwegian Wood, a work of literary journalism that is as fascinating as it is necessary, as provocative as it is profound. In March of 1995, agents of a Japanese religious cult attacked the Tokyo subway system with sarin, a gas twenty-six times as deadly as cyanide. Attempting to discover why, Murakami conducted hundreds of interviews with the people involved, from the survivors to the perpetrators to the relatives of those who died, and Underground is their story in their own voices. Concerned with the fundamental issues that led to the attack as well as these personal accounts, Underground is a document of what happened in Tokyo as well as a warning of what could happen anywhere. This is an enthralling and unique work of nonfiction that is timely and vital and as wonderfully executed as Murakami's brilliant novels.