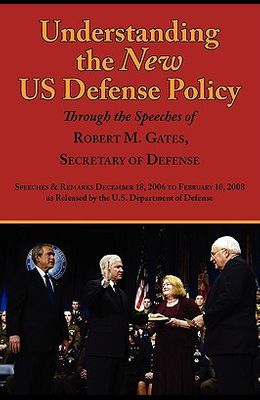 Understanding the New Us Defense Policy Through the Speeches of Robert M. Gates, Secretary of Defense: Speeches and Remarks December 18, 2006 to Febru

Many people don't realize that the Bush administration changed U.S. military policy, particularly towards Iraq, after the congressional elections of 2006. The start of the 110th Congress in 2007, and the shift in Congressional power, also coincided with the decline of the Rumsfeld-Cheney cabal that had been extremely influential in directing the war in Iraq and Afghanistan, and U.S. military policy in general, prior to that.******The emerging direction of the new U.S. military and defense policy is more pragmatic, less ideological and quietly (though not explicitly) recognizes the failure of policies in the earlier years of the current administration.******The man epitomizing this change more than any other is Robert M. Gates, the man who replaced Donald Rumsfeld as the U.S. Secretary of Defense. With vast experience in public service as well as in academia (he has lectured at Universities like Yale and Georgetown, and was the interim Dean of the Business School at Texas A&M just before being selected to replace Mr. Rumsfeld), he has quietly reversed a number of older policies and brought a much needed pragmatic approach to U.S. policies abroad.******He is also a lively speaker with a great sense of humor. Here are his speeches, as released by the U.S. Department of Defense, from his inauguration to February 2008-the key period when a lot of these changes in U.S. policies were taking place. These provide a valuable insight into where U.S. defense and military policies are headed during the remaining days of the Bush administration.

List of All Editions of Understanding the New Us Defense Policy Through the Speeches of Robert M. Gates, Secretary of Defense: Speeches and Remarks December 18, 2006 to Febru