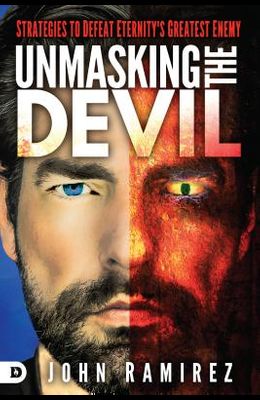 Satanist-Turned-Evangelist Gives You the Inside Strategy to Defeat the Devil's Plans Many people, even Christians, deny the devil's power. John Ramirez doesn't have that luxury--he experienced the prince of darkness up close and personal. In the impoverished streets of the South Bronx, John Ramirez found acceptance from a family of witches and warlocks. These practitioners of dark arts trained him to be a high-ranking satanic priest--a story told in his first book, Out of the Devil's Cauldron . However, everything changed when he met the living Christ. In Unmasking the Devil , John Ramirez shares an insider view of how satan operates so you can avoid his traps and learn how to: discern between the voice of God that directs to victory and satan's voice that leads to destruction. close the demonic doors satan uses to enter your life: entertainment, unhealthy relationships, greed, and false religion. activate the spiritual weapons of prayer, intercession, and Scripture to render hell powerless over your life. recognize how the spirits of Jezebel and Delilah attempt to infiltrate the church, create disunity, and render God's people powerless. No army goes into battle without first knowing the tactics of their enemy. Receive behind-the-scene glimpses of satan's strategies and equip yourself to live victoriously over the powers of darkness Spiritual warfare is a must for every Christian if they are going to survive in the coming years, says John Ramirez. It's time to stop playing patty-cake with the devil and learn how to put hell on notice.

List of All Editions of Unmasking the Devil: Strategies to Defeat Eternity's Greatest Enemy