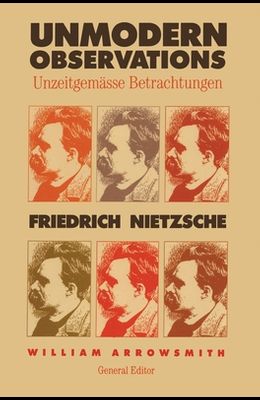 This translation of Nietzsche's early Unzeitgemasse Betrachtungen consists of four long essays and notes for a fifth. Nietzsche planned these works as part of an extremely ambitious critique of German culture. Although the project was never completed, the essays thematically linked and should be considered as a whole. This book, which presents these important works together in English for the first time, unifies the essays, provides introductions and annotations to each, and translates them in a way that does justice to the brilliance and versatility of Nietzsche's style. The dominant idea of Nietzsche's project is the regeneration of culture through a radical reshaping of modern educational institutions. Nietzsche believed that philosophy, the arts, and the ennobling study of antiquity had all been corrupted by systematic miseducation, the work of so-called educators, who, as culture-philistines, had disgraced the highest of vocations. In response to this fragmented modern world, Nietasche argues for the creation of amanworthy culture with a single uniftying style-a style that integrated theology, philosophy, education, classical scholarship, journalism, and art in a seamless, dynamic whole. This style, Nietzsche contends, can best be realized by heeding the great creative examples of the pre-Socratic philosophers, Schopenhauer, and Wagner, and by reforming education, above all the study of history and the archaic culture of Greece, so that it serves, rather than obstructs, the needs of human life. The essays include David Strauss: Writer and Confessor, introduced and translated by Herbert Golder; History in the Service and Disservice of Life, introduced by Werner Dannhauser and translated by Gary Brown; Schopenhauer as Educator, introduced by Richard Schacht and translated by William Arrowsmith; Richard Wagner in Bayreuth, introduced and translated by Gary Brown; and We Classicists, introduced and translated by William Arrowsmith.