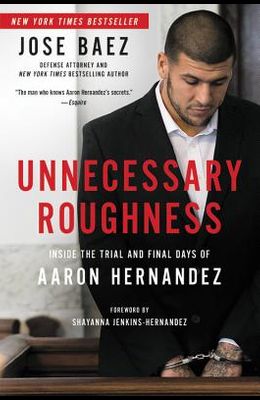 Unnecessary Roughness: Inside the Trial and Final Days of Aaron Hernandez

The New York Times bestseller: a revelatory inside story of the trial and final days of New England Patriots superstar Aaron Hernandez, by his attorney and New York Times bestselling author Jose Baez. When renowned defense attorney Jose Baez received a request for representation from Aaron Hernandez, the disgraced Patriots tight-end was already serving a life sentence for murder. Defending him in a second, double-murder trial seemed like a lost cause--but Baez accepted the challenge, and their partnership culminated in a dramatic courtroom victory, a race to contest his first conviction, and ultimately a tragedy, when Aaron took his own life days after his acquittal. This riveting, closely-observed account of Aaron's life and final year is the only book based on countless intimate conversations with Aaron, and told from the perspective of a true insider. Written with the support of Hernandez's fianc e, Unnecessary Roughness takes readers inside the high-profile trial, offering a dramatic retelling of the race to obtain key evidence that would exonerate Hernandez, and later play a critical role in appealing his first conviction. With revelations about Aaron's personal life that weren't shared at trial, and an exploration of the Chronic Traumatic Encephalopathy diagnosis revealed by his autopsy, Jose Baez's Unnecessary Roughness is a startling courtroom drama and an unexpected portrait of a fallen father, fianc , and teammate.