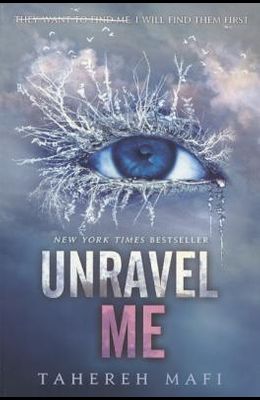 Book #2 in the Shatter Me Series
by
Tahereh Mafi

The New York Times bestselling sequel to the groundbreaking dystopian novel Shatter Me Kami Garcia, coauthor of the #1 New York Times bestselling Beautiful Creatures series, says Unravel Me is dangerous, sexy, romantic, and intense. I dare you to stop reading. Juliette is still haunted by her deadly touch. But now that she has teamed up with other rebels with powers of their own, she'll be able to fight back against The Reestablishment to save her broken world. With the help of these new allies, she'll also finally learn the secret behind Adam's--and Warner's--immunity to her killer skin. Unravel Me is perfect for fans who crave action-packed young adult novels with tantalizing romance like Divergent by Veronica Roth, The Hunger Games by Suzanne Collins, and Legend by Marie Lu. Ransom Riggs, #1 New York Times bestselling author of Miss Peregrine's Home for Peculiar Children, raves: A thrilling, high-stakes saga of self-discovery and forbidden love, the Shatter Me series is a must-read for fans of dystopian young-adult literature--or any literature

From the Back Cover Our lips touch and I know I'm going to split at the seams. He kisses me softly then strongly like he's lost me and he's found me and I'm slipping away and he's never going to let me go. Juliette has escaped from The Reestablishment. Now she's free from their plan to use her as a weapon, and free to love Adam. But Juliette will never be free from her lethal touch. Or from Warner, who wants Juliette more than she ever thought possible. Haunted by her past and terrified of her future, Juliette knows that she will have to make some life-changing choices. Choices that may involve choosing between her heart--and Adam's life.