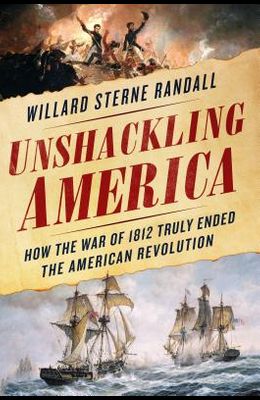 Unshackling America: How the War of 1812 Truly Ended the American Revolution

Unshackling America challenges the persistent fallacy that Americans fought two separate wars of independence. Willard Sterne Randall documents an unremitting fifty-year-long struggle for economic independence from Britain overlapping two armed conflicts linked by an unacknowledged global struggle. Throughout this perilous period, the struggle was all about free trade. Neither Jefferson nor any other Founding Father could divine that the Revolutionary Period of 1763 to 1783 had concluded only one part, the first phase of their ordeal. The Treaty of Paris of 1783 at the end of the Revolutionary War halted overt combat but had achieved only partial political autonomy from Britain. By not guaranteeing American economic independence and agency, Britain continued to deny American sovereignty. Randall details the fifty years and persistent attempts by the British to control American trade waters, but he also shows how, despite the outrageous restrictions, the United States asserted the doctrine of neutral rights and developed the world's second largest merchant fleet as it absorbed the French Caribbean trade. American ships carrying trade increased five-fold between 1790 and 1800, its tonnage nearly doubling again between 1800 and 1812, ultimately making the United States the world's largest independent maritime power.

Books similiar to Unshackling America: How the War of 1812 Truly Ended the American Revolution

List of All Editions of Unshackling America: How the War of 1812 Truly Ended the American Revolution