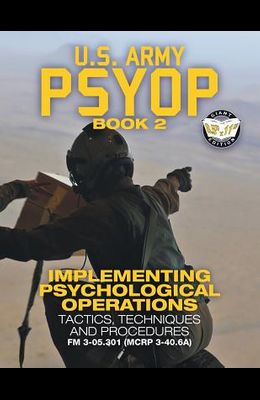 by
U S Army Army and Carlile Media

TO SUBDUE THE ENEMY WITHOUT FIGHTING IS THE ACME OF SKILL (Sun Tzu) Book 2 of 3 in the C.M.L. U.S. Army PSYOP series. Discover how to plan and prepare psychological warfare - PSYWAR - operations at the operational level. Learn how to change opinions , win hearts and minds , and convert people to your cause via mass communication Full-size edition - large 8.5 x 11 format clear, detailed text & illustrations. Complete & Unabridged . Batteries last hours, books last decades: get the print edition Often misunderstood by the general public, psychological operations (PSYOP) enable U.S. forces to influence a target population's opinions and behavior by affecting their impressions, thoughts and emotions. Psychological operations take many forms. They may be overt or covert; they may involve media as diverse as radio, television, loudspeaker broadcast, leaflet drop or social media. They may seek to influence combatant groups, civilian populations or a combination thereof. Whatever their form, effective psychological operations take control of the information received by the target, inserting the required memetic payload into the consumed media in a manner the target cannot easily ignore. In that regard, military psychological operations share many similarities with a wide variety of marketing operations, and the information contained within this series of U.S. Army manuals will be useful to media professionals in all fields, particularly those tasked with building and operating influence organizations and campaigns. Similarly, a general audience will find much of value here. It is our individual responsibility to safeguard our own minds from potentially-malicious external influence, and this can best be achieved by developing an understanding of the techniques used by the ever-increasing number of entities engaged in influence activities. These entities' intentions range from the benign - convincing us of which soap powder to use - to the dangerously malign - enticing us to form positive opinions of foreign enemy powers and political systems, or undermining our confidence in ourselves and our way of life . This is book 2 of 3 in the C.M.L. U.S. Army PSYOP series , which builds on the previous publication to provide PSYOP commanders and planners with the information required to implement PSYOP activities at the operational level. Also available: PSYOP Book 1: Psychological Operations Handbook (ISBN: 978-1-949117-08-0, FM 3-05.30) covers the fundamentals of military psychological operations in support of the national interest and is the Army's keystone publication for PSYOP principles and activities. It is written not exclusively for PSYOP personnel but for a wide military audience in order to provide a general appreciation for PSYOP potential and value. PSYOP Book 3: Executing Psychological Operations (ISBN: 978-1-949117-10-3, FM 3-05.302) is written for an audience of PSYOP personnel, providing guidance on executing effective PSYOP activities at the tactical level. THERE ARE BUT TWO POWERS IN THE WORLD , THE SWORD AND THE MIND . IN THE LONG RUN THE SWORD IS ALWAYS BEATEN BY THE MIND . (Napoleon Bonaparte) Search for CARLILE MILITARY LIBRARY to find more TOP-FLIGHT, SQUARED-AWAY publications for your professional bookshelf Information purposes only. Proudly published in the U.S.A. by CARLILE MEDIA.