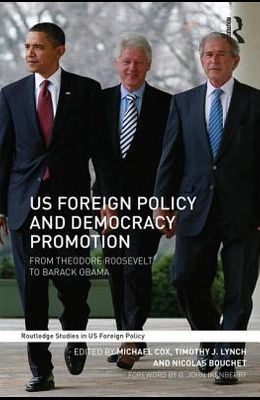 US Foreign Policy and Democracy Promotion: From Theodore Roosevelt to Barack Obama

The promotion of democracy by the United States became highly controversial during the presidency of George W. Bush. The wars in Iraq and Afghanistan were widely perceived as failed attempts at enforced democratization, sufficient that Barack Obama has felt compelled to downplay the rhetoric of democracy and freedom in his foreign-policy. This collection seeks to establish whether a democracy promotion tradition exists, or ever existed, in US foreign policy, and how far Obama and his predecessors conformed to or repudiated it. For more than a century at least, American presidents have been driven by deep historical and ideological forces to conceive US foreign policy in part through the lens of democracy promotion. Debating how far democratic aspirations have been realized in actual foreign policies, this book draws together concise studies from many of the leading academic experts in the field to evaluate whether or not these efforts were successful in promoting democratization abroad. They clash over whether democracy promotion is an appropriate goal of US foreign policy and whether America has gained anything from it. Offering an important contribution to the field, this work is essential reading for all students and scholars of US foreign policy, American politics and international relations.

Books similiar to US Foreign Policy and Democracy Promotion: From Theodore Roosevelt to Barack Obama

List of All Editions of US Foreign Policy and Democracy Promotion: From Theodore Roosevelt to Barack Obama