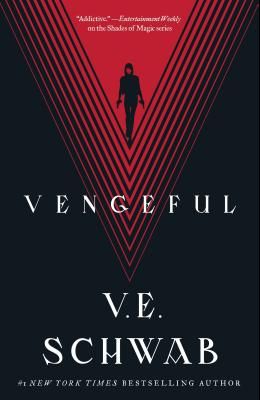 Book #2 in the Villains Series
by
Victoria Schwab
$13.01
Select Format

*NEW YORK TIMES BESTSELLER* *2018 GOOD READS CHOICE AWARD WINNER FOR BEST SCIENCE FICTION CATEGORY* A super-powered collision of extraordinary minds and vengeful intentions--V. E. Schwab returns with the thrilling follow-up to Vicious . Magneto and Professor X. Superman and Lex Luthor. Victor Vale and Eli Ever. Sydney and Serena Clarke. Great partnerships, now soured on the vine. But Marcella Riggins needs no one. Flush from her brush with death, she's finally gained the control she's always sought--and will use her new-found power to bring the city of Merit to its knees. She'll do whatever it takes, collecting her own sidekicks, and leveraging the two most infamous EOs, Victor Vale and Eli Ever, against each other once more. With Marcella's rise, new enmities create opportunity--and the stage of Merit City will once again be set for a final, terrible reckoning. Entertainment Weekly 's 27 Female Authors Who Rule Sci-Fi and Fantasy Right Now Schwab's characters feel vital and real, never reduced to simple archetypes... In a genre that tends toward the flippant or pretentious, this is a rare superhero novel as epic and gripping as any classic comic. Schwab's tale of betrayal, self-hatred, and survival will resonate with superhero fans as well as readers who have never heard of Charles Xavier or Victor von Doom. Publishers Weekly, starred review A brilliant exploration of the superhero mythos and a riveting revenge thriller. -- The Guardian on Vicious V.E.Schwab's Vicious is the superhero novel I've been waiting for: fresh, merciless, and yes, vicious. Wow. --Mira Grant, New York Times bestselling author of Blackout Vicious is dark and intricate and daring...you can't turn the pages fast enough. I loved it.--Dan Wells, New York Times bestselling author of I Am Not a Serial Killer