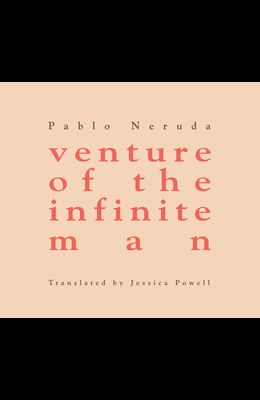 Venture of the Infinite Man

Neruda's long-overlooked third book of poetry, critical in his poetic evolution, now translated into English for the very first time venture of the infinite man was Neruda's third book, published in 1926, two years after his widely celebrated Twenty Love Poems and a Song of Despair . In a stark stylistic departure from the love poems, Neruda composed an epic poem in 15 cantos, discarding rhyme, meter, punctuation and capitalization in what he described as an attempt to better capture the voice of the subconsious. His readers were not prepared for this experiment, and decades after its publication, Neruda lamented that one of the most important books of my poetry remained woefully neglected and virtually unknown. Neruda considered venture essential to his evolution: Within its smallness and minimal expression, more than most of my works, it claimed, it secured, the path that I had to follow. Its long-overdue translation into English is cause for celebration Experimental, obscure, timeless, essential, venture of the infinite man, published two years after his famous Twenty Love Poems and a Song of Despair, set Pablo Neruda on his course toward becoming the greatest poet in the history of the Spanish language. Its publication in English is a historic event, above all today, above all in this moment, above all, now.-- Ra l Zurita , author of Antepara so In his early twenties and after the enormous success of Twenty Love Poems and a Song of Despair , Neruda surprised everyone by changing aesthetic gears in this book that was at once innovative and emblematic. The effort was part of what would ultimately become his ceaseless embrace of change as the sine qua non of style. Jessica Powell does wonders rendering these cantos for the first time into English, filling in a gap his legion of admirers will be thankful for. This isn't only an unseen Neruda but an unforeseen one too.-- Ilan Stavans , editor of The Poetry of Pablo Neruda What an act of generosity this book is. Eisner's introduction contextualizes and informs precisely as needed, and Jessica Powell's translation achieves astonishing beauty and refreshing truth. She has listened deeply to Neruda's text.-- Katherine Silver , translator Jessica Powell is the 'distant light that illuminates the fruit' of venture of the infinite man , the twenty-two year old Pablo Neruda's untranslated third book. One part quest and one part inner map, in Powell's hands the delicious and strange language of the original dances effortlessly in English. Readers can now experience the moment Neruda evolved from being only a brilliant singer of love poems into a maker of rich, stunning worlds. This book is a treasure. --Tom s Q. Mor n , author of Patient Zero This book has the fascination of being Neruda becoming Neruda. It's the brilliant young poet who made himself famous at nineteen and twenty with Twenty Love Poems , beginning to absorb the lessons of the new surrealism and making his way to the world poet he would become in Residence on Earth . So it is a leap into the imagination of one of the crucial poets of the twentieth century as he is feeling his way. --Robert Hass , former U.S. Poet Laureate

Frequently Asked Questions About Venture of the Infinite Man

0
|   0  reviews
Did you read Venture of the Infinite Man? Please provide your feedback and rating to help other readers.
Write Review

List of All Editions of Venture of the Infinite Man