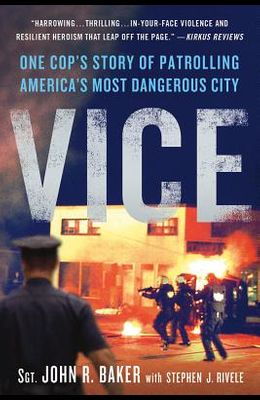 Vice: One Cop's Story of Patrolling America's Most Dangerous City

9 square miles. 10,000 criminals. 130 cops. Compton: the most violent and crime-ridden city in America. What had been a semirural suburb of Los Angeles in the 1950s became a battleground for the Black Panthers, home of the Crips and Bloods and the first Hispanic gangs, and the cradle of gangsta rap. At the center of it, trying to maintain order, was the Compton Police Department. Never more than 130 strong, it faced an army of criminals that numbered over 10,000. At any given time, fully one-tenth of Compton's population was in the justice system, yet this tidal wave of crime was held back by the thinnest line of the law--the Compton Police. John R. Baker was raised in Compton and became the city's most decorated police officer. He was involved in some of its most notorious, horrifying, and scandalous criminal cases. Baker's account of Compton from 1951 to 2001 is one of the most powerful and compelling cop memoirs ever written--an intensely human story of sacrifice the price the men and women of the Compton Police Department paid to preserve their city.

Books similiar to Vice: One Cop's Story of Patrolling America's Most Dangerous City

List of All Editions of Vice: One Cop's Story of Patrolling America's Most Dangerous City