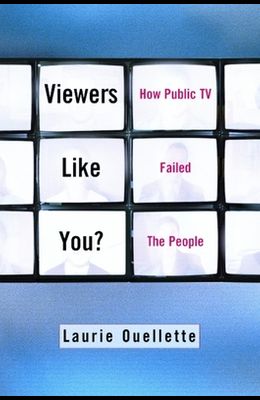 Viewers Like You: How Public TV Failed the People

How public is public television if only a small percentage of the American people tune in on a regular basis? When public television addresses viewers like you, just who are you? Despite the current of frustration with commercial television that runs through American life, most TV viewers bypass the redemptive oasis of the wasteland represented by PBS and turn to the sitcoms, soap operas, music videos, game shows, weekly dramas, and popular news programs produced by the culture industries. Viewers Like You? traces the history of public broadcasting in the United States, questions its priorities, and argues that public TV's tendency to reject popular culture has undermined its capacity to serve the people it claims to represent. Drawing from archival research and cultural theory, the book shows that public television's perception of what the public needs is constrained by unquestioned cultural assumptions rooted in the politics of class, gender, and race.