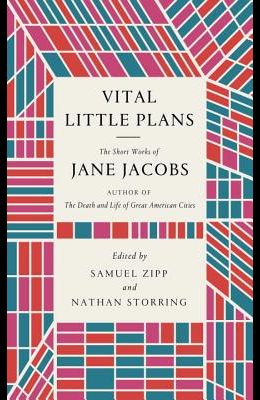 by
Jane Jacobs and Samuel Zipp and Nathan Storring

A career-spanning selection of previously uncollected writings and talks by the legendary author and activist No one did more to change how we look at cities than Jane Jacobs, the visionary urbanist and economic thinker whose 1961 book The Death and Life of Great American Cities started a global conversation that remains profoundly relevant more than half a century later. Vital Little Plans is an essential companion to Death and Life and Jacobs's other books on urbanism, economics, politics, and ethics. It offers readers a unique survey of her entire career in forty short pieces that have never been collected in a single volume, from charming and incisive urban vignettes from the 1930s to the raw materials of her two unfinished books of the 2000s, together with introductions and annotations by editors Samuel Zipp and Nathan Storring. Readers will find classics here, including Jacobs's breakout article Downtown Is for People, as well as lesser-known gems like her speech at the inaugural Earth Day and a host of other rare or previously unavailable essays, articles, speeches, interviews, and lectures. Some pieces shed light on the development of her most famous insights, while others explore topics rarely dissected in her major works, from globalization to feminism to universal health care. With this book , published in Jacobs's centenary year, contemporary readers--whether well versed in her ideas or new to her writing--are finally able to appreciate the full scope of her remarkable voice and vision. At a time when urban life is booming and people all over the world are moving to cities, the words of Jane Jacobs have never been more significant. Vital Little Plans weaves a lifetime of ideas from the most prominent urbanist of the twentieth century into a book that's indispensable to life in the twenty-first. Praise for Vital Little Plans Jacobs's work . . . was a singularly accurate prediction of the future we live in. -- The New Republic In Vital Little Plans, a new collection of the short writings and speeches of Jane Jacobs, one of the most influential thinkers on the built environment, editors Samuel Zipp and Nathan Storring have done readers a great service. -- The Huffington Post A wonderful new anthology that captures Jacobs's] confident prose and her empathetic, patient eye for the way humans live and work together. -- The Globe and Mail A timely reminder] of the clarity and originality of Jane Jacobs's] thought. --Toronto Star Vital Little Plans ] comes to the foreground for Jane Jacobs's] centennial, and in a time when more of Jacobs's prescient wisdom is needed. -- Metropolis Jacobs] changed the debate on urban planning. . . . As Vital Little Plans ] shows, she never stopped refining her observations about how cities thrived. -- Minneapolis Star Tribune Jane Jacobs] was one of three people I have met in a lifetime of meeting people who had an aura of sainthood about them. . . . The ability to radiate certainty without condescension, to be both very sure and very simple, is a potent one, and witnessing it in life explains a lot in history that might otherwise be inexplicable. --Adam Gopnik, The New Yorker A rich, provocative, and insightful collection. -- Reason