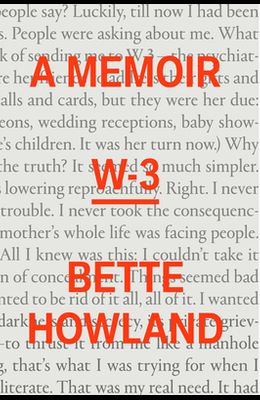 An extraordinary portrait of a brilliant mind on the brink: A new edition of the 1974 memoir by the author of the acclaimed collection Calm Sea and Prosperous Voyage . With an introduction by Yiyun Li. For a long time it had seemed to me that life was about to begin--real life. But there was always some obstacle in the way. Something to be got through first, some unfinished business; time still to be served, a debt to be paid. Then life could begin. At last it had dawned on me that these obstacles were my life. From the author of the acclaimed collection Calm Sea and Prosperous Voyage comes W-3 , the account of a brilliant mind on the brink. In 1968, Bette Howland was thirty-one, a single mother of two young sons, struggling to support her family on the part-time salary of a librarian; and laboring day and night at her typewriter to be a writer. One afternoon, while staying at her friend Saul Bellow's apartment, she swallowed a bottle of pills. W-3 is both an extraordinary portrait of the community of Ward 3, the psychiatric wing of the Chicago hospital where she was admitted; and record of a defining moment in a writer's life. The book itself would be her salvation: she wrote herself out of the grave. First published in 1974, the memoir that launched Bette Howland's career is being reissued as part of A Public Space's ongoing revival of one of the significant writers of her generation. (Saul Bellow) With a new introduction by Yiyun Li.