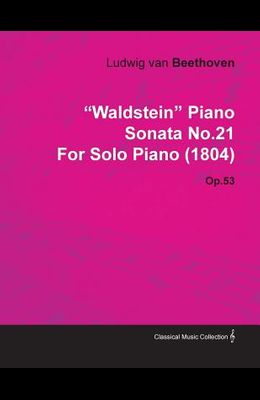 Beethoven's Piano Sonata No. 21 in C major, Op. 53, known as the Waldstein, is one of the three most notable sonatas of his middle period. Completed in summer 1804 and surpassing Beethoven's previous piano sonatas in its scope, the Waldstein is a key early work of Beethoven's Heroic decade (1803-1812) and set a standard for piano composition in the grand manner. The Waldstein has three movements: 1. Allegro con brio, 2. Introduzione: Adagio molto (in F major), 3. Rondo. Allegretto moderato - Prestissimo. Ludwig van Beethoven (1770 - 1827) was a seminal German composer. He had a significant influence on the transition from the Classical to the Romantic era of music, and to this day he is considered to be one the most celebrated and important composers of all time. This volume is highly recommended for fans of Beethoven's music, and it constitutes a must-have for collectors of important classical scores. Classic Music Collection constitutes an extensive library of the most well-known and universally enjoyed works of classical music ever composed, reproduced from authoritative editions for the enjoyment of musicians and music students the world over. This edition also includes an introductory biography of Beethoven written by Joseph Otten.