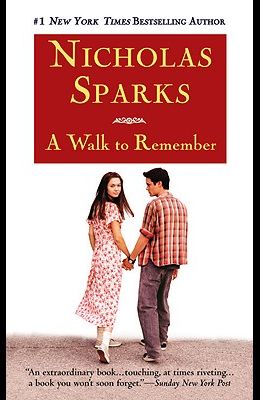 This bestseller, from the author of The Notebook and Message in a Bottle, is now a major motion picture by Warner Brothers, scheduled for release in January 2002. Recalling his last year of Beaufort High in North Carolina in 1958, Landon Carter remembers the girl he fell for--Jamie, the shy daughter of the town's Baptist minister, who showed him the depths of the human heart. Now with new cover art.

From the Back Cover There was a time when the world was sweeter...when the women in Beaufort, North Carolina, wore dresses, and the men donned hats... Every April, when the wind smells of both the sea and lilacs, Landon Carter remembers 1958, his last year at Beaufort High. Landon had dated a girl or two, and even once sworn that he'd been in love. Certainly the last person he thought he'd fall for was Jamie, the shy, almost ethereal daughter of the town's Baptist minister...Jamie, who was destined to show him the depths of the human heart -- and the joy and pain of living. From the internationally bestselling author Nicholas Sparks comes his most moving story yet...