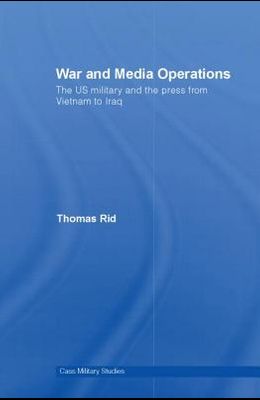 War and Media Operations: The US Military and the Press from Vietnam to Iraq

This is the first academic analysis of the role of embedded media in the 2003 Iraq War, providing a concise history of US military public affairs management since Vietnam. In late summer 2002, the Pentagon considered giving the press an inside view of the upcoming invasion of Iraq. The decision was surprising, and the innovative embedded media program itself received intense coverage in the media. Its critics argued that the program was simply a new and sophisticated form of propaganda. Their implicit assumption was that the Pentagon had become better at its news management and had learned to co-opt the media. This new book tests this assumption, introducing a model of organizational learning and redraws the US military's cumbersome learning curve in public affairs from Vietnam, Grenada, Panama, the Persian Gulf, Somalia, the Balkans to Afghanistan, examining whether past lessons were implemented in Iraq in 2003. Thomas Rid argues that while the US armed forces have improved their press operations, America's military is still one step behind fast-learning and media-savvy global terrorist organizations. War and Media Operations will be of great interest to students of the Iraq War, media and war, propaganda, political communications and military studies in general.