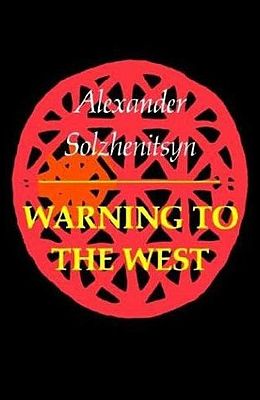 Warning to the West

Alexander Solzhenitsyn's Warning to the West includes the texts of the Nobel Prize-winning author's three speeches in the United States in the summer of 1975, his first major public addresses since his expulsion from the Soviet Union in 1974: on June 30 and July 9 to trade-union leaders of the AFL-CIO in Washington, D.C., and in New York City, and on July 15 to the United States Congress; and also the texts of his BBC interview and radio speech, which sparked widespread public controversy when they were aired in London in March 1976. Solzhenitsyn's outspoken criticism of the West's growing weakness and complacency and his belief that Russia's growing strength will enable her to establish supremacy over the West without risk of a nucelar holocaust are expressed with the moral authority of a great novelist and historian. Solzhenitsyn mounts a public indictment of the supine inattention of the West that rings like the blows of the hammer with which Luther nailed his manifesto to the doors at Wittenberg.-- Times Literary Supplement