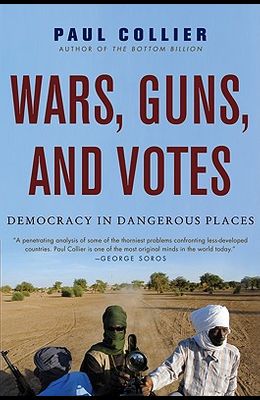 The author of The Bottom Billion investigates the violence and poverty that plague the countries at the bottom of the world economy. Collier argues that the spread of elections and peace settlements in the world's most volatile countries may lead to a brave new democratic world.

From the Back Cover In Wars, Guns, and Votes , Paul Collier investigates the violence and poverty in the small, remote countries at the lowest level of the global economy and argues that the spread of elections and peace settlements may lead to a brave new democratic world. For now and into the foreseeable future, however, nasty and long civil wars, military coups, and failing economies are the order of the day. An esteemed economist and a foremost authority on developing countries, Collier gives an eye-opening assessment of the ethnic divisions and insecurities in the developing countries of Africa, Latin America, and Asia, where corruption is often firmly rooted in the body politic, and persuasively outlines what must be done to bring peace and stability. Groundbreaking and provocative, Wars, Guns, and Vote s is a passionate and convincing argument for the peaceful development of the most volatile places on earth.